There are several different types of boycotts. Consumer boycotts ask individuals not to purchase Israeli products or from companies that are complicit in violations of Palestinian human rights. Academic, cultural, and sporting boycotts involve withdrawing support from complicit Israeli institutions. Apartheid Free Zones are how businesses or community groups can pledge to support the boycott.

This is one of the easiest ways that individuals can support the BDS movement in their daily lives, by making ethical purchasing decisions. Click on the buttons to the right to see what products you should boycott, why you should boycott them, and where these products are sold!

Do you want to take your consumer boycott to the next level? You can approach a store and ask that they stop putting certain products on their shelves. Click here for some tips and tricks on how to approach stores about these products!

What products should I boycott?

The full list of BDS brands and products to boycott includes thousands of companies. The global BDS movement is well aware that asking people to boycott every single brand with a connection to Israel is unfeasible. This is why the BDS movement has asked consumers to take a targeted approach to the economic boycott by targeting certain items and brands. This allows us to focus on a few brands at one time and maximize our efforts. Click on the images below to jump to brands and items in the spotlight. 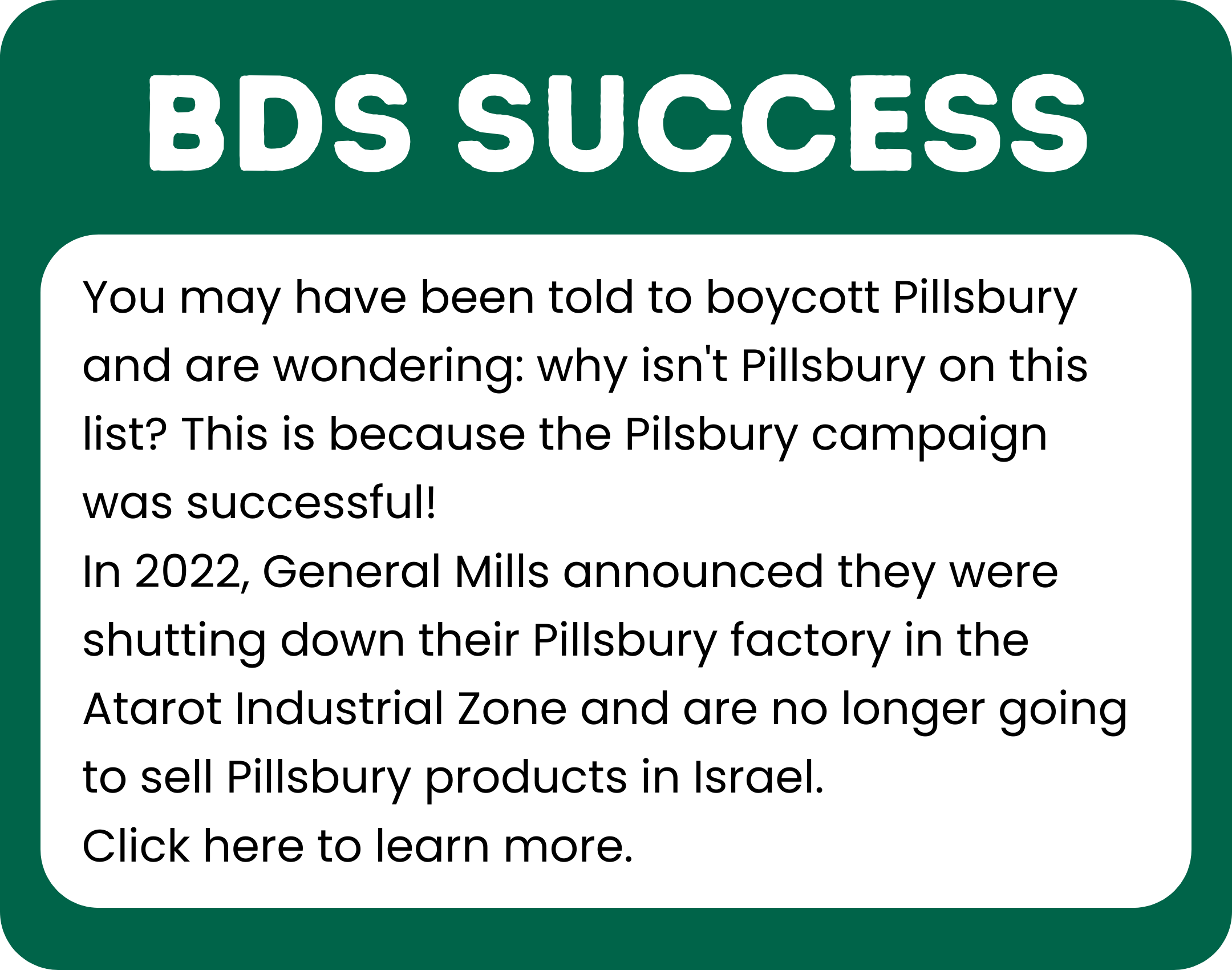 Fruits, vegetables and packaged foods from Israel are labeled as 'products of Israel', despite the produce coming from occupied Palestinian territories and stolen land. Do not buy produce that is exported from Israel and ask that these products are removed from store shelves.

Similar to produce coming from Israel, wines sold in stores are labeled as 'products of Israel', despite the grape farming, wine production, and bottling often being done on stolen land. Do not buy these products, and demand that they are removed from store shelves.

For other provinces and territories in Canada, do not buy the wine labels above, and make sure to always check for a "Product of Israel" label on the back.

Sabra hummus is a partnership between PepsiCo and the Strauss group, which is an Israeli food company that financially supports the Israeli army.

Puma is the Israel Football Association's main sponsor. The IFA has teams in Israeli settlements, which are illegal under International Law and considered war crimes, and in occupied Palestinian territories. Puma's association and support for the IFA makes it actively complicit in the creation of Israeli settlements, which lead to the forced displacement of Palestinian families from their homes.

Ahava manufactures its cosmetics in a factory in the illegal Mitzpe Shalem settlement in the occupied West Bank. Ahava, however, labels its skin care products imported into the EU as originating from “The Dead Sea, Israel.” Ahava uses Palestinian natural resources without the permission of or compensation to Palestinians. Meanwhile, Israel denies Palestinians access to the shores of the Dead Sea and its resources, despite one-third of the western shore of the Dead Sea lying in the occupied West Bank.

HP is famous for its laptops and software but few may know that HP provides technology for the Israeli military. HP plays an integral role in the Israeli navy and Israel’s ID card system, a tool used to discriminate against Palestinians.

Take your boycott to the next level! Below are big brands sold in Canada that are not part of the official BDS strategy, but still contribute to the violation of Palestinian human rights.

Important Note: The 729 barcode is not a reliable indicator of an Israeli product. Historically, some have suggested that a barcode starting with 729 indicates a product of Israel. This is sometimes accurate, but not always. Israeli manufacturers try increasingly to obscure the origins of their products to prevent a boycott, which is why Israeli products sometimes have a non-729 barcode.  It's best to look for a "Product of Israel" label on the product or google the company/manufacturer.

Keter Plastic manufactures many of its products in the Jewish-only colonies of Barkan and Oranit in the West Bank. Keter specialises in plastic items such as garden furniture, shelves, boxes, etc. These products are sometimes distributed under the brand name Black & Decker Keter. For more info, check out our factsheet!

Moroccan oil is an Israeli beauty products company that has listed products as “Made in Israel” but refuses to disclose the location of its production facilities. For more info, check out our factsheet!

Tool brand FatMax is a subsidiary of Stanley tools, and some of their products are made in Israel.  Keep in mind, however, that FatMax items are manufactured from around the world, and check the package for “Made in Israel” before placing your sticky note.

Israeli startup Wix.com enables users to create free and low-cost websites. The web-platform was founded, and currently is headquartered in, Tel Aviv, one of the first Israeli settlements built in the early 20th century.

As one of the world’s largest producer of generic drugs, Teva is a large contributor to Israel’s economy, and funds their defense force. Since the Israeli Ministry of Health only allows Israeli-registered drugs to be imported to the West Bank and Gaza strip, Palestinians are forced to rely on Israeli pharmaceuticals like Teva for their medication. Ask your pharmacist what other options – whether name-brand or generic drugs – are available when purchasing your medications.

Why should I approach a store about their products?

While consumer boycotts are an important tool, it is important that stores remove these products from their shelves so the company does not benefit from any sales. The reality is, Canadian stores serve Canadian customers. If stores are hearing that Canadians are unhappy with the products they sell, management might rethink restocking those products.

What should I do before I approach a store?

Who should I be approaching?

If you chose to approach a store about unethical products being sold, it is important that you refrain from directing your request to staff such as shelf stockers and grocery clerks. Instead, you should direct your request to store management. If you know where management offices are in the store, you can go straight there. If not, respectfully tell a store employee you have concerns about a product and would like to speak to management about it.

As is mentioned above, you should come prepared with a product in mind and how this product/company is engaging in unethical practices and complicit in war crimes. Feel free to print out our BDS talking points for some extra help!

CJPME's main efforts are focused on consumer boycotts, but academic and cultural boycotts are also pillars of the BDS movement.

The academic boycott aims to showcase how Israeli universities play a role in the systemic oppression of Palestinians. Institutions like Tel Aviv University develop military weapons to be used against Palestinians and write doctrine that justifies the disproportionate force Israel uses against civilians. Universities play a role in the institutionalization of anti-Palestinian racism by having unfair disciplinary practices and not calling out - sometimes even supporting - Israeli human rights abuses.

In 2022, CJPME issued a joint statement with civil society and faculty groups expressing human rights concerns over a lobby trip to Israel by Canadian university presidents.

To learn more about the academic boycott, click here.

The cultural boycott focuses on artists, writers, and other culturally relevant persons or institutions such as cultural organizations, cities, and unions. Such persons and organizations are asked to refrain from participating in events, making agreements, or pursuing projects with the Israeli government or Israeli lobby groups.

In recent years, CJPME has had campaigns urging Canadian artists like Céline Dion and BADBADNOTGOOD to cancel their shows in Israel.

To learn more about the cultural boycott, click here.