2018 – Look at what we've accomplished together

"There's nothing like a challenge to bring out the best in man," said Sean Connery once.  We can't help but think of Connery's quote when we look at 2018, facing so many challenges from Trump's policies and our disappointing Canadian government.  But regardless, we continue fighting hard for human rights, both in the Middle East, and the related issues here in Canada.  Please take a look below and celebrate with us our accomplishments since January! 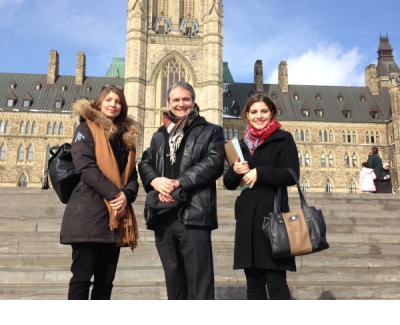 Of course, our successes depend very much on your support. If you value the work that we do, could you consider a donation?  A monthly donation, even if it's a small amount, makes a huge difference.  You can also give a one-time donation on-line here, by calling 438-380-5410, or by mailing in this form.  Thanks for your support - when you contribute to our work, you share in our many successes!

CJPME helps 18,000 Canadians email Trudeau on Gaza   International outrage was building even earlier, but when Israel shot and killed over 55 protesters on Monday, May 14th, even Trudeau called publicly for an investigation into Israel’s conduct. Of course, the pro-Israel lobby tried to get Trudeau to recant, but CJPME was able to set up a platform allowing 18,000 Canadians to email their support for Trudeau’s statement on Gaza. The Trudeau government continues to waffle, but days after he was supported by 18,000 emails of support, his government continued to defend its position.

Over the Winter, CJPME worked hard to respond to Trump’s outrageous decree seeking to change the status of Jerusalem. Sadly, not long afterwards, Conservative Leader Andrew Scheer echoed Trump’s Jerusalem statement. In both cases, CJPME was quick to react with videos, press statements, petitions, and op-eds criticizing the leaders’ disregard for international law and indifference to Israel’s human rights violations. In March, CJPME delegates made a trip to Parliament Hill to meet with dozens of Parliamentarians, urging them to vocally condemn any unilateral actions on Jerusalem. Click on the links below to see our recent videos on Jerusalem: - Besieged in Jerusalem - Scheer BS on Jerusalem - Canada? Jerusalem? Principles? Think again!

CJPME set up a platform earlier this month which enabled 18,000 Canadians to email Trudeau and challenge him to keep his promise to investigate Israel's killings in Gaza.  As part of this campaign, CJPME reached out to Canadians via all different means: videos, social media, press statements, and other.  One of our videos was entitled, "Real Democracies don't shoot protesters!"

In anticipation of the government’s release of the M-103 Report on religious discrimination in Canada, CJPME published the results of an EKOS poll on Islamophobia co-sponsored by CJPME. This survey, done in partnership with the Canadian Muslim Forum (CMF), confirmed that many Canadians recognize the problem of Islamophobia in Canada, stand opposed to it, and expect the government to take measures to address it. The survey also revealed how politically polarized attitudes on Islamophobia are. For example, around 50% of Liberal, NDP and Green supporters consider Islamophobia to be a significant problem, whereas only 14% of Conservative supporters do. This survey received national media coverage!

When Israel first opened fire on peaceful protestors in Gaza on March 31st, CJPME moved quickly to condemn Israel’s massacre of innocent Palestinian civilians. CJPME issued a heavily-worded press statement and produced a video condemning Canada’s silence on the massacre – a video which reached nearly 50,000 Canadians online! CJPME is working hard to ensure that Canadians are aware of what is really going on in Gaza. CJPME also met with Canadian politicians at the end of April to discuss the need for Canada to join the international condemnation of Israel’s actions.

Since the beginning of the year, CJPME representatives have been on Parliament Hill repeatedly, meeting with dozens of members of Parliament from each of Canada’s five political parties. In one-on-one meetings, CJPME covered a range of issues with MPs, discussing Jerusalem, the crisis in Gaza, Canada’s role in the Israel-Palestine conflict, and the need for concrete action against Islamophobia in Canada, among other issues. CJPME works hard to communicate all the facts to members of Parliament, reminding them constantly of the human rights abuses faced by Palestinians, and Canada’s obligations under international law.

CJPME responded promptly and forcefully to Canada's inaction on Israel's Gaza massacres these past two months.  In March and April, CJPME met with almost 50 MPs on Parliament Hill to discuss the situation in Gaza, as well as many other challenges, including Islamophobia, Jerusalem, and other issues.

CJPME Empowers Canadians to Meet with Members of Parliament

CJPME has always sought to enable average Canadians to meet with their elected representatives. CJPME always involves volunteers, whether meeting MPs locally or in Ottawa. So far this year, CJPME has been thrilled to involve volunteers from the Muslim community in Kingston and Laval for this year’s delegations to Parliament Hill. In preparation for this collaboration, CJPME travelled to Kingtson to give a Sunday-afternoon delegation training session to members of the Islamic Society of Kingston. Likewise, CJPME gave in-person training sessions in Laval and Montreal. In March, CJPME was proud to have over a dozen members of the Muslim Canadian community join CJPME representatives in meetings with MPs on Parliament Hill.

This past February, CJPME President Thomas Woodley and other CJPME members were present at the NDP convention in Ottawa to support pro-justice resolutions on Israel-Palestine. CJPME officially endorsed the most prominent resolution calling for a ban on settlement products and developed a unique flyer that argued in favour of economic pressure on Israel, given Israel’s human rights violations. CJPME faithfully handed out the flyer to hundreds of participants at the NDP convention, engaging party members in discussions around Israel-Palestine in the process. CJPME members furthermore participated in a silent protest on the convention floor, which sought to bring awareness to Israel’s mistreatment of Palestinian child detainees.

CJPME went several times to Parliament Hill these past few months.  At left, CJPME delegates meet the MP Yasmin Ratansi.  At middle, CJPME's Miranda Gallo and Thomas Woodley share a moment with MP Niki Ashton.  At right, the plight of Palestinian Ahed Tamimi is made prominent at the NDP national policy convention.

This year, CJPME met repeatedly with MPs involved in the Canada-Palestine Parliamentary Friendship Association, including members of the executive team such as Marwan Tabbara and Alexandre Boulerice. With the encouragement and involvement of many players across Canada, the Association helped to organize a fact-finding trip to Palestine in April, a step that CJPME had repeatedly called for in its meetings with MPs. CJPME is thrilled that in addition to meeting with Palestinian human rights groups, the delegation of MPs met with officials from B’Tselem, Breaking the Silence and two Israeli NGOs which speak out boldly for Palestinian human rights. CJPME has met with several of the MPs after the trip, and is working to support follow-up actions by the MPs involved, e.g. reports and speaking opportunities.

Last fall, as part of its Peace in Palestine campaign, CJPME launched a Parliamentary ePetition calling on the Canadian government to condemn Israel’s settlements. The ePetition received close to 4000 signatures – a stronger response than more than 90 percent of other such petitions. CJPME received a lukewarm and unsatisfying government response to the petition in March.  CJPME has now launched the second phase of the Peace in Palestine campaign, meeting with dozens of MPs to discuss the possibility of introducing a parliamentary motion condemning Israel’s illegal settlements. This campaign is an extended effort to get Canada’s politicians to have an honest public discussion about Israel’s “settlements,” and how Canada must respond.

CJPME has not abandoned its vision of passing a motion in Parliament to condemn Israel's settlements.  CJPME ran a successful ePetition on the issue over the winter, and hopes to advance the discussion in Parliament with this modest step.

Last Fall, CJPME launched the increasingly popular “Reality Check” video series, where we highlight government hypocrisy on issues of Middle East human rights. This year, CJPME has produced more videos for the “Reality Check” series. For instance, one of our videos alerted Canadians to how the Trudeau government has maintained Harper-era policies on Israel. Another set the record straight on the Israeli massacre in Gaza in March. In January, CJPME also launched a new series of short videos that respond to breaking news and timely topics such as BDS victories, the status of Jerusalem, and Israel’s mistreatment of Palestinian child detainees. Through each of these videos, CJPME captures the attention of tens of thousands of Canadian viewers, especially younger Canadian viewers. CJPME is working hard to reach out to the Millennial generation and inform and involve them in our human rights campaigns.

The "No Way to Treat a Child" Campaign is an international human rights campaign to put the emphasis on Israel's mistreatment of Palestinian children.  CJPME has joined the campaign and published a video promoting the campaign.  With almost every video, CJPME reaches literally tens of thousands of Canadians on Facebook.

For years, CJPME has urged the Canadian government to maintain Canada’s funding to the UN aid agency for Palestinian refugees (UNRWA) continues. These efforts met with success as the government has twice pledged $25 million in annual funding to UNRWA. CJPME thanked MPs for the $10 million in emergency funding to UNRWA earlier this year as a response to the Trump government cuts in funding.

It’s been almost a year since the first Syrian refugee families co-sponsored by CJPME arrived. CJPME sponsored 9 different families from 2014-2016, of whom 5 have arrived. Many of our supporters gave money to enable this support – and we thank you. Imagine our excitement when the first of these families arrived in Canada last year. At this beginning of 2018, we had the pleasure of welcoming another sponsored refugee family to Canada. While CJPME is not a “refugee resettlement” organization per se, we could not ignore the obvious need for Canadians to do all that they could for Syrian refugees. Thanks to our like-minded supporters who helped make this possible.

Despite it's many other shortcomings, the Trudeau government gave $10 million to the UN Aid Agency for Palestinian refugees (UNRWA.)  CJPME applauded this step, and continues to be one of the most vocal supporters of Canadian aid for Palestinian refugees.  CJPME welcomed another Syrian refugee family in February, one of six which CJPME has co-sponsored.  (Note: Photo is a file photo)

CJPME uses many different channels to communicate with politicians, including press statements, position papers and factsheets. Below are some of the ones we’ve published this year: