Message from the CJPME President

Normally, at the end of each year, we send an email highlighting CJPME’s many accomplishments. Yet even though 2019 has been an amazing year for CJPME (see below), I need to start with a more sobering message: donations to CJPME are shrinking – NOT growing.

Despite our many achievements, unless we’re able to grow the support that we need, CJPME may not survive more than another year or two. What we REALLY need are monthly donations, as they allow us to plan and budget our resources.

If you’ve never given monthly, would you consider a monthly donation? Can you give $20/month, $50/month, $100/month, more? We need to raise an additional $5000/month to address our current challenges.

Operating without sufficient funds has a huge impact on CJPME, our people, and our effectiveness. Among them are:

I don’t like to have to speak of the closure of CJPME to encourage donations, but we won’t survive under the status quo. If you believe in the value and effectiveness of our work, then please make an investment to see it continue.

P.S. We always encourage our supporters to get in touch, whether to donate, or offer ideas, suggestions or comments. Please feel free to email or call us anytime.

P.P.S. We mailed a 4-page newsletter to our supporters on Dec. 4th. It contains a full interview with me, plus other highlights of our work. Please click here to view the full newsletter.

Above: A high-level view of CJPME's expenses and revenues in 2018.  CJPME is funded entirely by private donors, and is limited in growth because of the limited funds.

Did you ever wonder how CJPME compares to the pro-Israel lobby groups?

Because CJPME does advocacy, media, and outreach work, we’re facing off with some of the strongest players of the pro-Israel lobby. Unfortunately, we’re at a huge disadvantage in terms of staffing and funding. Consider the comparisons below.

The pro-Israel Lobby in Canada (1)

Centre for Israel and Jewish Affairs (2)

(3) Despite its name, “Honest Reporting Canada” is in fact dedicated to squelching criticism of Israel in Canadian media.

The staff at CJPME work so hard. I myself regularly work 80+ hour weeks. That’s how we’re able to do so much! Here’s a sampling of the highlights from 2019:

Dozens of face-to-face, one-on-one meetings with Members of Parliament, lobbying for things like increased Canadian funding for Palestinian refugees, condemnation of Israel’s territorial ambitions, reduced sales of arms to Israel and Middle East dictatorships, and greater action against Islamophobia in Canada.

In addition to our visits to Parliament Hill, we are repeatedly “in the face” of politicians with our constituent email campaigns, postcard campaigns, and policy campaigns.

Hopefully, you had a chance to be present at one of CJPME’s events this past year, as we hosted three dynamic and articulate speakers on Palestine and the Middle East. These events elevate the conversation in Canada on important Middle East topics, and enable us to get strategic voices into mainstream Canadian media.

In September, we brought Palestinian-American lawyer and author Noura Erakat to Montreal, Ottawa and Toronto for a talk entitled, “Justice for Some: Law and the Question of Palestine.” Erakat has become increasingly well-known in recent years for her brilliant and incisive appearances on mainstream media advocating for Palestinian human rights. Erakat was interviewed by the CBC’s Michael Enright for his program Sunday Edition, heard by two million.

CJPME also hosted former NDP Deputy Leader Libby Davies in a talk entitled, “Palestine on the Hill.” Davies described the challenges facing federal politicians in Ottawa as they seek to raise the issue of Palestinian human rights. She also provided guidance to activists on how to raise these issues within political parties and on Parliament Hill.

Finally, in November, CJPME brought veteran Middle East journalist Robert Fisk to ten different Canadian cities, from Montreal to Vancouver. Taking place just a week after Turkey invaded northern Syria, Fisk treated audiences to a very timely commentary on a broad range of topics, from Turkey and Syria, to Russia and the US, to Israel and Palestine. CJPME procured many media spots for Fisk, including CBC’s The Current, heard by millions across Canada.

Broad election impacts, with our lobbying, our campaigns, and our policy. Our Elections Guide on the positions of Canada’s political parties was repeatedly cited through media and social media. Our campaigns supporting pro-Palestinian candidates meant that those candidates were allowed to run, and weren’t abandoned by their parties.

Above: CJPME's elections guide - covering 13 different issues - was one of many important policy initiatives that CJPME launched in 2019.  Another  major initiative was CJPME's "Middle East New Deal" which proposed recommendations for 23 different policy areas. 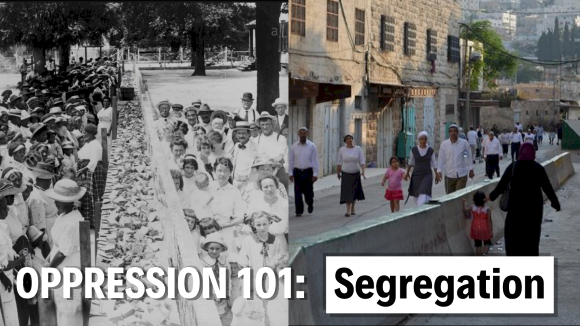 Above: CJPME's "Occupation 101" video series is a series of 12 different videos which compare Israel's mistreatment of the Palestinians to various other important historic injustices.  Above, segregation in the American south is compared to segregation imposed by Israel on the Palestinians.

CJPME is unique in its ability to do both grassroots organizing, as well as professional policy work. Throughout the year, CJPME developed solid policy that was used by politicians, the media, and the general public. Below is just a sample

Position Papers. CJPME produces position papers that it uses when it meets with politicians, but which are also convenient for average Canadians in working locally with their own representatives. Here are a few examples:

PRs. Throughout the year, CJPME issues press releases on active issues that go out to about 1000 media, organizations, and politicians. Here are a few recent examples:

Factsheets. CJPME regularly publishes factsheets which provide an overview of key issues of importance in Canadian policymaking. They are used when CJPME visits politicians, and when average Canadians want a quick primer on a hot Middle East topic:

Left: CJPME published quite a bit of material on the impact of Trump and his illegal decrees on the Middle East.   Right: Among many other projects, CJPME also published a campaign and factsheet on the protests in Algeria for more representative governance..

How we did with our Strategic Projects from 2019:

Last year, we asked our supporters to enable four projects, and many of you responded generously. Here’s how we did.

Success! Challenging Candidates in October Federal Elections: CJPME made big waves with its “Elections Guide” on Middle East issues, released in advance of the fall elections.

Success! Combatting Islamophobia: Last year, CJPME joined Muslim Canadian organizations calling for January 29 to be designated as a national day of remembrance and action on Islamophobia. We made fantastic progress, and will renew our calls for this designation to take place with the new government.

Still at it! Palestine Map Ads in Canadian Cities: In 2014, we launched a campaign to get the “Disappearing Palestine” maps into a major Canadian city’s subway or buses, but were blocked by scared city administrators again and again. While not successful in 2018, we are still trying to action a successful strategy to make this happen.

We’ve got some great projects lined up for next year, so you’ll be hearing from us again soon!

On behalf of the CJPME Team