The work at CJPME is extremely hard. Short on staff, we often work evenings and weekends to get the job done. That’s how we’re able to accomplish so much! Here’s a sampling of the highlights from 2020:

68 Canadian MPs Sign CJPME’s Pledge to Oppose Israeli Annexation. When Israel announced plans to annex the Palestinian West Bank last spring, CJPME swung into action to mobilize a Canadian political response. Recruiting partners and endorsements, including the United Church of Canada, the Canadian Labour Congress, CUPE and dozens of others, CJPME appealed to politicians to sign a pledge to oppose Israel’s plan. In the end, almost 70 Canadian MPs from four different parties signed the pledge, which read (in part), “I call on the Canadian government to consider all reasonable diplomatic and economic options to stop annexation and prompt Israeli compliance with international law.” A big thanks to the over 8700 Canadians who sent an email calling their MPs to sign the pledge!

CJPME a Leader in Raising $165,000 in COVID Relief to Palestine.  Through the spring and summer, CJPME was one of the lead organizations in raising $165,000 for COVID-19 aid for Palestinians. In late September, we were able to gift the money to the International Development and Relief Foundation (IDRF), a Canadian aid agency providing development relief to Palestinians. The funds were collected as part of the Palestine Medical Relief Campaign sponsored by the CJPME Foundation and the Coalition of Canadian-Palestinian Organizations (CCPO), of which CJPME is a part. Many CJPME donors contributed to the campaign, and CJPME is deeply recognizant and appreciative. The money is being used to purchase four Lyra x1 Ventilators, two OMNI III Medical Monitors and two D500 Defibrillators.

CJPME and Zatoun launch initiative to expand support for Palestinian farmers.  For over 15 years, Zatoun has supported Palestinian olive farmers by importing their olive oil at fair trade terms to Canada. Considering the purchase an act of solidarity with the Palestinian people, Zatoun has selected small retailers and ships Palestinian olive oil, soap and za'atar across Canada. From sales proceeds, Zatoun has contributed over $500,000 to two projects: Trees for Life (to plant olive trees in Palestine) and Project Hope (to deliver educational and recreational programs to youth in refugee camps in Nablus). In solidarity with Palestinians, CJPME is proud to open its Montreal office (580 Sainte-Croix, Suite 060, H4L 3X5, 438-380-5410) as a depot for Zatoun fair trade products (olive oil, za'atar and soap). Outside of Montreal, Zatoun is grateful to accept online orders and will ship anywhere in Canada. A classy holiday gift, Palestinian olive oil is also a great way for CJPME supporters to start conversations with friends and neighbours.

CJPME Survey Shows Canadian Gov’t Out-of-touch with Average Canadians.  With the uncertainty in the spring around COVID-19, CJPME took the opportunity to commission an EKOS survey on Canadian attitudes on a number of topics related to Palestine-Israel. Working with Independent Jewish Voices Canada and the United Network for Justice and Peace in Palestine-Israel, CJPME issued the survey results in three releases between June and September. The survey covered many topics: Canada’s UN Voting, Jerusalem, the ICC investigation of Israel, Israel’s annexation plans, etc. The results were eye-opening, and demonstrated just how much the Canadian government is totally out-of-touch with average Canadians. Now our job is to challenge Canadian politicians to truly represent their constituents! 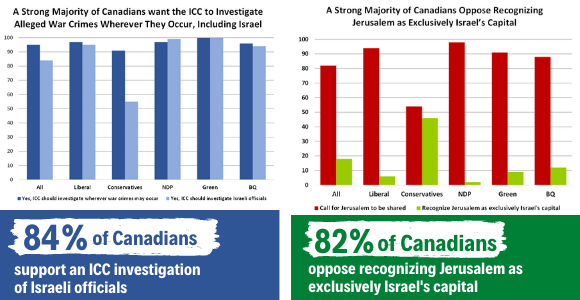 Settlement in CJPME’s Defamation Lawsuit against Rebel Media.  In October, we announced that our defamation lawsuit against Ezra Levant and Rebel Media News Network Ltd. had been settled. Launched in 2016, our lawsuit was based on a series of defamatory publications released by Rebel Media that attacked CJPME for its promotion of the BDS campaign. CJPME had endorsed BDS in 2008 as a form of non-violent protest grounded on principles of international law. Since that time, CJPME has been one of the movement’s foremost proponents in Canada. CJPME will continue to reject attempts to attack the BDS movement and to intimidate its supporters. We thank our many members for their years of support and encouragement in this long-running lawsuit.

CJPME Evaluates Green Party Leadership Candidates on Middle East Issues.  As the Green Party planned to choose a new leader in October, CJPME worked with Independent Jewish Voices to launch a detailed assessment of the eight candidates’ positions on the Middle East. CJPME and IJV sent a questionnaire to each candidate, and also performed independent research on each candidate’s previous statements, positions and activities. Published in August, the assessment provided clear evidence that some candidates were much better than others when it came to human rights in the Middle East. Our assessment, as well as our anti-annexation pledge, turned sanctions against Israel into a campaign issue, which was brought up as a topic for discussion during several debates. Many Green Party members thanked us for the guidance we provided in advance of the final voting.

Campaign to Improve Canada’s Voting at the UN.  In November of last year, many Canadians were pleasantly surprised when the Trudeau government voted in support of Palestinian self-determination. Unfortunately, however, in almost all cases the Trudeau government has continued Harper’s legacy of voting against UN resolutions that support Palestinian human rights. This year, CJPME has been working not only to get Canada to maintain its vote for Palestinian self-determination, but also to improve its votes on the other resolutions (e.g. Jerusalem, Aid to Palestinians, etc). Stay tuned in the coming weeks, as we do our best to pressure Canada to vote in support of Palestinian human rights.

CJPME Hires VP Michael Bueckert, Ph.D. and BDS expert.  CJPME struggled to manage early in 2020 following the resignation of Miranda Gallo to pursue a master’s degree. So we were obviously delighted to have Michael Bueckert join our team as VP in June. Dr. Bueckert brings a wealth of experience and knowledge to his new role, with a background in the BDS movement, the Palestine-Israel conflict, political activism, student organizing, social media, peacebuilding, and social justice. As project lead for CJPME’s survey reports on Palestine-Israel, CJPME’s Green Party leader’s assessment, and other projects, Michael has already made a huge positive impact. Michael’s involvement in CJPME’s social media has also resulted in significant growth for CJPME on these platforms. The future of CJPME’s Palestine solidarity work is clearly brighter with the skills, experiences and drive that Michael brings.

CJPME Campaigns to Oppose Censorship Around Palestine-Israel.  Across Canada, pro-Israel groups work to create a chill around advocacy for Palestinian human rights. In turn, CJPME is working hard with partners to protect the free expression of Palestinian Solidarity activists. For example, CJPME is battling pro-Israel groups which are pressuring many jurisdictions to adopt a definition of antisemitism which conflates criticism of Israel with antisemitism. CJPME also admonished the U. of Toronto law school, which rescinded a job offer to a Professor who had documented Israel’s human rights abuses. CJPME has also reproached York U. for failing to defend the academic freedom of a professor falsely accused of antisemitism.

CJPME Campaign Helps Secure Canadian Coronavirus Aid for Refugees.  At the beginning of the global Coronavirus scare, CJPME pushed the Canadian government to help those beyond its borders. CJPME called for Canada to provide aid for Gaza, refugees, Canada’s migrant and undocumented workers, and others. Thousands of Canadians participated in our campaign, and the Trudeau government ultimately responded to our calls. In April, CJPME knew its campaign had paid off when the Canadian government announced new international assistance for refugees and poorer countries struggling with Coronavirus.

CJPME Launches UN Dashboard to Track Canada’s anti-Palestinian Voting at UN.  Many Canadians would probably be appalled to learn that at the UN, the Trudeau government consistently votes against resolutions which support Palestinian human rights. Each November and December, the UN General Assembly (UNGA) overwhelmingly passes a series of 16 resolutions in support of Palestine human rights, but the Trudeau government consistently aligns itself with the US and Israel on the losing side of these lopsided votes, e.g. 178-6. Sign up for day-to-day updates on Canada’s shameful record as each resolution moves through the UNGA. You’ll also be able to see how Canada’s voting on these resolutions has generally worsened over time, from 2000 to 2020.

Press Statements.  Throughout the year, CJPME issues press releases on active issues that go out to about 1000 media, organizations, and politicians. Here are a few recent examples:

Factsheets and other Analyses.  CJPME regularly publishes factsheets and other resources which provide an overview of key issues of importance in Canadian policymaking. They are used when CJPME visits politicians, and when average Canadians want a quick primer on a hot Middle East topic:

The CJPME team has worked hard for values and principles that we all hold dear, both for Canada and in the Middle East. While we do as much as we can, we depend on your ongoing support for the continuance of our work. Please consider donating to enable CJPME to continue its vital work.

We’ve got some great projects lined up for next year, so you’ll be hearing from us again soon!

On behalf of the CJPME Team