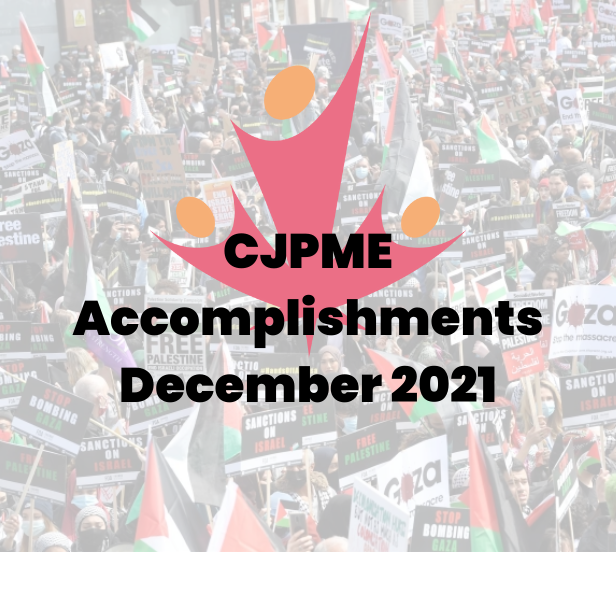 We’ve had an incredible year of accomplishments – see the details below – but the treadmill just turns faster. We've mobilized the public, pressured politicians, and challenged the media in hundreds of different ways, but we need to do more. We need to hire two new staff – a campaign coordinator, and a policy/media advocate – who will help defend human rights and challenge Israel’s impunity.

Help us make these key hires by supporting us with a donation? Monthly donations are especially helpful, as they help us to budget and hire with greater certainty. But any donation makes a huge difference. We can also accept donations of stocks and securities.

Help us make 2022 our most impactful year ever! With your support, we can, and must, do so much more to make a difference in Canada and the Middle East!

Not everyone is aware of all the things that CJPME does during periods of crisis, as when Israel’s ethnic cleansing in Sheikh Jarrah eventually led to its deadly assault on Gaza this past May. Here’s a rundown of everything that we did to push Canada and Canadians to intervene positively:

CJPME was extremely busy in the run-up to the September Federal Election. Our highly-anticipated “Vote 2021 Elections Guide” rated the five largest federal parties on ten different issues. This 66-page analysis – see summary below – was sent to over 50,000 Canadians, and received extremely positive feedback.

CJPME was also a coordinating partner in the “Vote Palestine” campaign during the 2021 federal election. “Vote Palestine” promoted 11 policy points under four policy themes, ranging from Canada’s trade with Israel, to Canada’s support for international law, to protecting freedom of expression. In the end, dozens of candidates in the election – several of whom were elected – pledged to support our policy points if elected.

CJPME Punches way above its weight on Social Media

CJPME’s total expenses in 2020 were about $215,000. This is just a pittance compared to the budgets of the two largest Canadian pro-Israel organizations: the Centre for Israel and Jewish Affairs (CIJA) (around $11 million), and B’nai Brith (almost $3 million). Both of these organizations have over 50 employees, and offices in many Canadian cities.

But despite our huge disadvantage in staffing and resources, we compete very successfully when it comes to getting our message out on social media (see table above). Especially when we do email campaigns on specific issues, we are often able to mobilize far more people than our adversaries.

For over 15 years, Zatoun has supported Palestinian olive farmers by importing their olive oil at fair trade terms to Canada. Last year, CJPME opened its Montreal office as a Zatoun depot for Palestinian fair-trade products (olive oil, za’atar and Nablus soap.) Zatoun and CJPME collaborate as an act of solidarity with the Palestinian people. From sales proceeds, Zatoun has contributed over $500,000 to two projects: Trees for Life (to plant olive trees in Palestine) and Project Hope (to deliver educational and recreational programs to youth in refugee camps in Nablus). Outside of Montreal, Zatoun accepts online orders and ships anywhere in Canada. Palestinian olive oil is a great way for CJPME supporters to start conversations with friends and neighbours – and help Palestinian farmers!

While the Trudeau government has voted in support of Palestinian self-determination at the UN in recent years, it otherwise continues Harper’s legacy of voting against UN resolutions that support Palestinian human rights. Since last year, CJPME has been campaigning to pressure Canada to maintain its vote for Palestinian self-determination. Our UN dashboard, with its damning summary of Canada’s UN votes, has been cited by progressive politicians, while our campaigns pressure officials in Ottawa and at the UN in New York. Voting continues this week: Please support our campaigns and sign up for updates on Canada’s UN voting to keep abreast of developments.

CJPME Foundation Raises over $200,000 for Palestinians

Throughout the spring and summer, the CJPME Foundation raised $210,000 in aid for Palestinians. Congratulations and “thank you!” to the many of you who made this humanitarian relief possible!

In May, in response to Israel’s reckless bombing of Gaza, the CJPME Foundation sent $62,000 to Gaza to provide emergency food, medical kits, and medical supplies. In addition, the Foundation’s “Help Gaza Breathe” campaign raised $157,000 between February and June in order to provide a medical-grade oxygen generating unit to Gaza’s Al-Shifa Hospital. Since the onslaught of COVID and increased hospitalizations, Gaza health care facilities had suffered from a chronic shortage of medical oxygen.

Again, we thank the many generous Canadians who made each of these projects possible.

In October, CJPME released the sobering results of its national poll about Canadian-Arabs and anti-Arab racism in Canada. The report, entitled, “Marginalized and Misunderstood: Survey on Attitudes on Arabs and Anti-Arab Racism in Canada,” found that an overwhelming 79% of Canadians acknowledge that prejudice against Arabs is a problem. 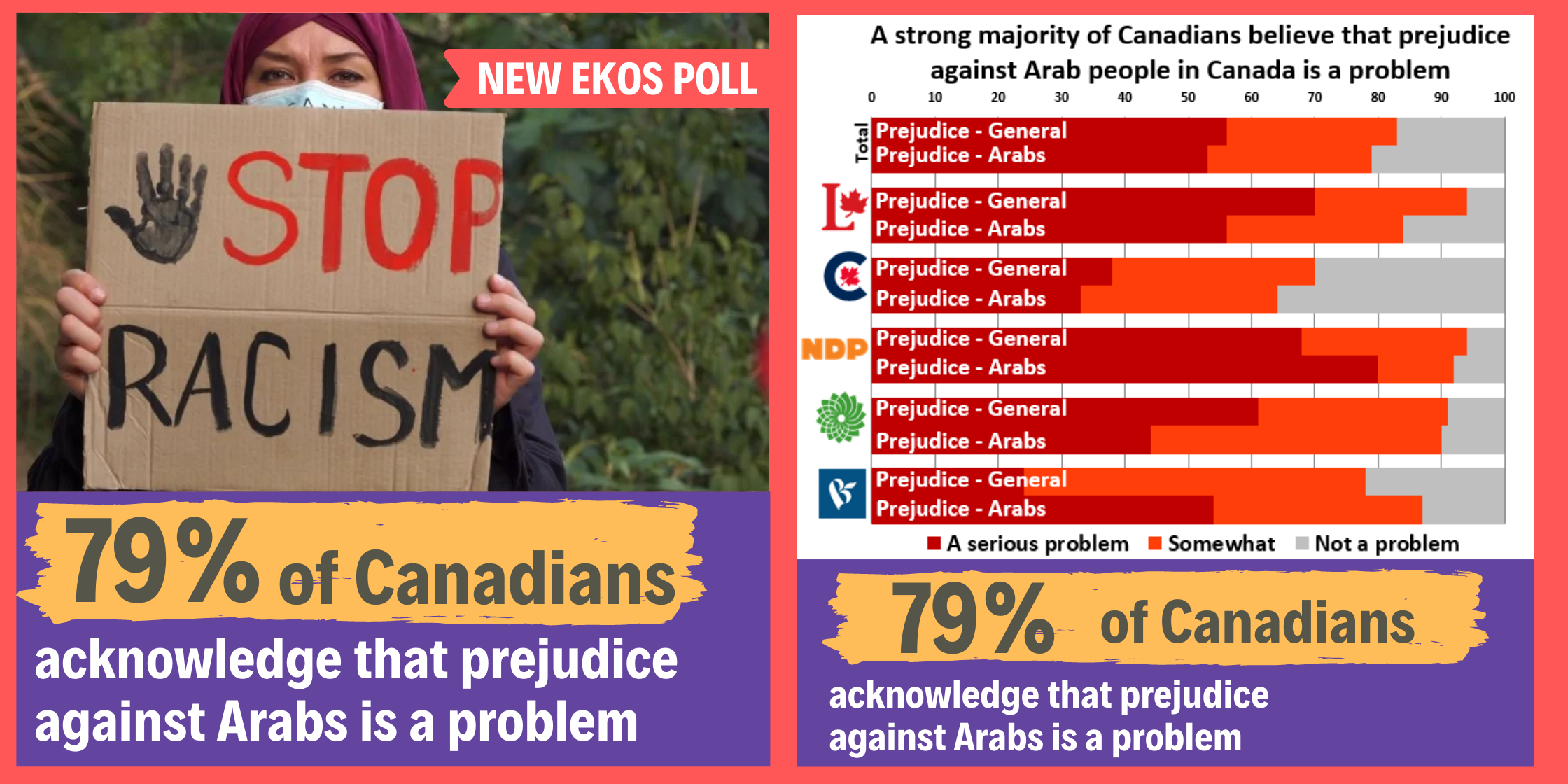 Canadians also acknowledged that many factors could negatively affect the ability of Arab-Canadians to secure employment, including “having a name that sounds Arab” (64%), “having a strong Arab accent” (73%), and “difficulty fitting in” (78%.).

The survey, co-sponsored with the Canadian Arab Federation (CAF) and the Arab Canadian Lawyers Association (ACLA) revealed many other facets of systemic anti-Arab in Canada – issues that CJPME is taking up with politicians in the months and years ahead.

"CJPME Debrief”: A progressive podcast about Palestine and Canada

Just days ago, we launched “CJPME Debrief” – a new audio podcast - as a way to reach new audiences with our message on human rights in Palestine and the broader Middle East. In its first week, “CJPME Debrief” made the “Top Ten” on Apple among Canadian news commentary podcasts.

Already with seven published episodes, the podcast provides an effective and accessible platform for progressive commentary on the Canada-Palestine relationship. Listeners will get a timely and expert take on how Canada, its politicians, the media and others should respond to developments.

Early in the year, CJPME reached out to Palestine Solidarity groups in the UK, the US, Ireland and the EU to establish a group of Parliamentarians around the world willing to speak out on Palestinian human rights. Composed of 23 legislators from 10 countries, including the US, Canada, the UK, Ireland, Italy, Finland, Belgium and several other European countries, the group has already had two meetings, and issued two powerful statements.

CJPME Hosts Webinar Series on BDS and other Topics

Unable to do in-person events due to the disruption of the pandemic, CJPME has instead hosted a fantastic series of Webinars, each with a panel of experts, on a variety of topics:

Factsheets and other Analyses

CJPME regularly publishes factsheets and other resources which provide an overview of key issues of importance in Canadian policymaking. They are used when CJPME visits politicians, and when average Canadians want a quick primer on a hot Middle East topic:

CJPME exists to give people the tools to make themselves heard: by their politicians, by the media, and by the public. This is why our campaigns are so important to us. Here’s a sampling from the past year:

Important Statements to Media, the Public and Others

Some of CJPME’s most impactful work results from statements, whether press statements or other public announcements or positions. Here is a sample from this past year:

In October, CJPME announced the settlement of a small claims court lawsuit with Ezra Levant and Rebel Media News Network Ltd.. Launched in early 2021, CJPME’s suit was based on Rebel Media’s failure to promptly comply with the terms of a previous settlement between the two parties, reached in February 2020.

The statement of claim in CJPME’s most recent lawsuit argued that, despite repeated reminders, Rebel Media had not complied with one of the conditions of the settlement for more than six months following the February 2020 settlement. The previous settlement was based on a series of defamatory publications released by Rebel Media that attacked CJPME for its promotion of the BDS campaign.

The CJPME team has worked hard for values and principles that we all hold dear, both for Canada and in the Middle East. While we do as much as we can, we depend on your ongoing support for the continuance of our work.

Please consider making a donation, or renewing your monthly donation to enable CJPME to continue its vital work.