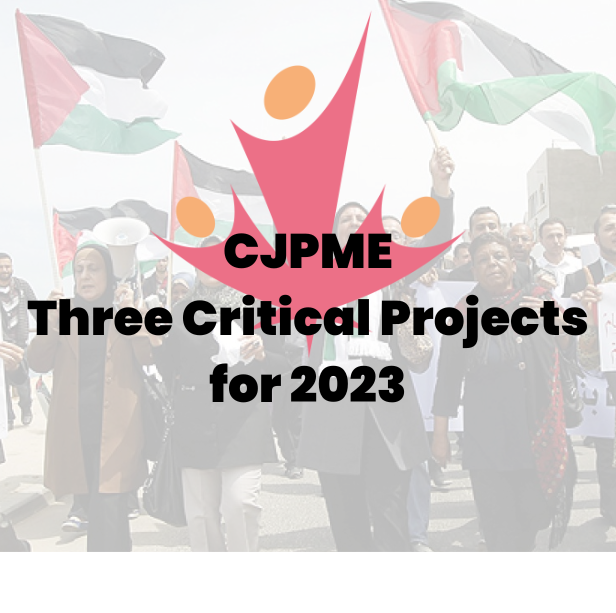 Last week, we highlighted our impressive accomplishments (below), with new breakthroughs with students, the media and politicians! But huge new challenges loom for 2023. Can you help reach our new goals below?

#1: Expand our Lobbying with Members of Parliament

2022 was our best year yet in terms of strengthening relationships with members of Parliament (MPs)! Our analysis and input were more solicted by politicians and policymakers than ever before. Our report on Canadian arms sales to Israel and our UN Dashboard were just two initiatives that garnered wide attention on Parliament Hill. But we need to hire a Parliamentary Policy Analyst to do even more: more one-on-one meetings with MPs; more incisive analysis; more lobbying! Can you donate to strengthen our lobbying?

For years, CJPME has dreamed of launching a "media monitoring" capability to rival pro-Israel groups which constantly pressure media on coverage of Israel-Palestine. Earlier this month, we finally purchased an expensive media tool to enable the launch of this capability! But we'll be starting next month with skeleton staffing, and desperately need to hire a dedicated media analyst. Canadian media need to hear more from pro-Palestinian voices like ours. Could you donate to empower this media advocacy?

The best way to help us accomplish the above projects is to start a monthly donation – even if a modest amount – so that we can budget for staff and expenses. Of course, any donation is gratefully accepted. We can also accept donations via eTransfer, donations over the phone (438-380-5410), donations via regular mail, or donations in stocks and securities.

Are you in a position to make a very large donation? Please give us a call at 438-380-5410 so we can discuss the best possible giving strategy.

The projects above are things that NEED to be done, and have been needed for a long time! But they’ll only happen when the structures and qualified staff are in place. Please help us make these projects a reality!

Tom, Khaoula, Michael, Madeleine and the rest of the team

ICYMI, here's a summary of some of the things we accomplished this past year!

We’re a small staff at CJPME, but we work super hard to make a difference for human rights in the Middle East, and related issues in Canada. Take a look below at what we accomplished this past year!

This past year, CJPME became Canada’s first registered lobbyist focused specifically on Palestinian human rights in Canada's history! In Canada, official lobbyist status is achieved after an organization exceeds a minimum threshold of resources and engagement with elected officials. Even though CJPME has been meeting with members of Parliament since 2004, we had never met the minimum threshold for registration. Thanks to our recent growth and expanded capacity, we were able to expand our engagement with Parliamentarians.

CJPME was thrilled to launch two exciting new programs for students and campus solidarity groups this year. In the spring, we launched our academic fellowships program. The first-ever recipient of the $1000 fellowship was a young woman at Wilfrid Laurier University doing a project to help Palestinian diaspora youth learn about their heritage. In November, we opened up applications for the 2023 fellowships.

And over the summer, we launched a grant program for campus groups doing Palestine solidarity work. In the end, we awarded grants to twelve different groups, from Montreal, QC to Victoria, BC. Not only have the grants fueled greater student activism, but CJPME is ecstatic to be working more closely to support the activities of these groups.

CJPME’s VP Michael Bueckert completed a two-week delegation to Palestine in November with Peter Larson of the Ottawa Forum on Israel/Palestine. The trip provided CJPME the opportunity to connect directly with many organizations and individuals who are working to protect human rights and fight for a just future in Palestine.

Highlights of the trip included meetings with leaders of Defence for Children International -- Palestine (DCIP) and Addameer. Michael also met with representatives of the BDS National Committee, the co-founders of the One Democratic State Campaign, and many other community organizations, Palestinian business owners, politicians, academics, and youth activists. See our full report here.

CJPME exists to give people the tools to make themselves heard: by their politicians, by the media, and by the public. We launch campaigns which are Canadian, strategic, significant, and potentially impactful if successful. Here’s a sampling from the past year:

Among solidarity organizations, CJPME is one of the few which does both grassroots activism as well as in-depth policy reporting. CJPME’s “long-form” reports relating to Canada and Palestine-Israel get significant uptake and do much to elevate CJPME’s public profile.

For over 15 years, Zatoun has supported Palestinian olive farmers by importing their olive oil at fair trade terms to Canada. In 2020, CJPME opened its Montreal office as a Zatoun depot for Palestinian fair-trade products (olive oil, za’atar and Nablus soap.) Zatoun and CJPME collaborate as an act of solidarity with the Palestinian people.

Outside of Montreal, Zatoun accepts online orders and ships anywhere in Canada. Palestinian olive oil is a great way for CJPME supporters to start conversations with friends and neighbours – and help Palestinian farmers! Note that due to a Holiday order backlog, new orders will be fulfilled in January.

BDS – the Boycott, Divestment and Sanctions campaign pressuring Israel economically – is always an active file for CJPME. Earlier this year, we launched our “BDS Hub” to provide Canada-specific information on how to be involved in BDS.

Among other things, you can find products to boycott, lists of Canadian organizations which have endorsed BDS, and ideas on how to have a BDS impact in your community.

Above, we talk about our new student grants and fellowships. But this is only part of what CJPME has been doing to support students this past year. With its new “Student Hub,” CJPME created a complete resource centre for students in 2022.

For several years, the pandemic had prevented CJPME from doing speaking tours, but CJPME finally got back on the road in 2022. CJPME’s president Tom Woodley, and VP Michael Bueckert, were both contributors to a book published in April, 2022, entitled, Advocating for Palestine in Canada. With the book launch as a platform, CJPME visited solidarity communities in Calgary, Edmonton, Saskatoon and Kelowna, BC. The discussions were rich with insight and perspective, leaving Woodley, Bueckert and audiences energized to expand the movement.

Launched a year ago, CJPME’s “Debrief” podcast has been an amazing vehicle to discuss developments in Canadian news and solidarity work.

Whether Michael and Tom are discussing developments or interviewing guests, the “Debrief” audience gets the latest scoop on breaking topics. Among our 50+ episodes, we’ve hosted Saleh Hijazi of Amnesty International, NDP MP Niki Ashton, and UN Special Rapporteur Michael Lynk.

Following the success of CJPME’s “Debrief” podcast – covering news and politics around Palestine – we decided to launch a second podcast in the spring of 2022. Called “All Things Palestinian Canadian,” the new podcast explores life for diaspora Palestinians, exploring all aspects of Palestinian culture, art and history to encourage greater Palestinian pride and engagement.

As many of our supporters know, since 2020 CJPME has been working hard to highlight Canada’s shameful diplomatic support for Israel at the UN. Our UN dashboard, with its damning summary of Canada’s UN votes, has become an important reference site for progressive politicians and the media, while our campaigns put increasing pressure officials in Ottawa and at the UN in New York.

CJPME continues to publish factsheets and other resources which provide an overview of key issues of importance in Canadian policymaking. They are used when CJPME visits politicians, and when average Canadians want a quick primer on a hot Middle East topic. Here are some we published in 2022:

CJPME speaks authoritatively to the media and the public

Some of CJPME’s most impactful work results its public statements, whether press statements, official/open letters, or other public announcements or positions. In 2022, CJPME published 55 such statements! Here is a small sample:

Throughout the spring and summer, the CJPME Foundation raised close to $180,000 in humanitarian aid for Palestinians. Congratulations and “thank you!” to the many of you who made this humanitarian relief possible!

Early in the year, the CJPME Foundation launched a campaign to fund a large-impact water well project for the Al-Zaitoon neighbourhood of Gaza City. Construction began in September, and the well is now serving 30,000 Palestinians with 100 cubic metres of water per hour. And with the extra funds raised, the CJPME Foundation funded two new playgrounds in the Deir El-Balah refugee camp: one at the Rudolf Falter Primary School, and the second at the Al-Salah Primary School. A third playground is expected soon.

Again, we thank the many generous Canadians who made each of these projects of the CJPME Foundation possible.